I Am A Friend of God
Chord Charts

Download the free chord charts for this worship song by Israel Houghton / Michael Gungor and also performed by Chris Tomlin:

What is the original key of Friend of God? 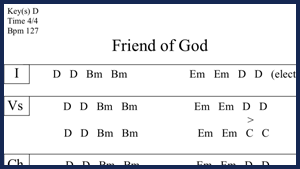 Musically, this song is faster song at 127 beats per minute and is written in 4/4 time. There are also a few chords outside of the normal E chord family in the verse.

The D chord is the "flat 7" chord relative to the E major scale. This chord creates a unique rock type sound.

There is also an unusual rhythm change on the D chord in the verse, known as a pushed eighth. That chord happens one eight note before the normal down beat of the measure. You can learn more about how to create a pushed eighth strum pattern in the intermediate worship guitar course.

For the strum pattern, you can use the normal 4/4 strum pattern that works with most songs, as long as you can keep up with the pace.

Otherwise, you can simply play down strums, where you accent the 1, 2, 3,4 and then play lighter with one strum between each number. So, you will be strumming "one and two and three and four and" for each measure.

Just like any song, you can use two guitars, and have one play open chords, while the other guitar plays a different chord family, using a capo.

What is the meaning of Friend of God?

The scripture passage of James 2:23 says that "and the scripture was fulfilled that says, "Abraham believed God. and it was credited to him as righteousness, and he was called God's friend."

Lets take a look at the lyrics of Friend of God to see what the song says:

Who am I that You are mindful of me?
That You hear me
When I call

Is it true that You are thinking of me?
How You love me
It's amazing!

The verse begins with a recognition that we aren't worthy, in ourselves to be considered of God's thoughts and even his love.

Our friendship with God isn't based on our worth or our merit. We can't take the credit for a relationship with God that would be considered a friendship.

In fact we know in Romans, that our sin separates us from God, and apart from a sacrifice, we aren't able to be in a relationship with God. God's love for us, through Christ, opens the door to a relationship with the Father and a path of responding in worship.

The verse ends with "It's amazing" because of the gap from what we deserve, based on our merit, verses what is true.

The chorus is a declaration of a truth that came out of the context of the first verse. It's almost as if it's so hard to believe, that you have to say it several times to really believe it's true.

Notice how it end: "He calls me friend." The capstone is not that we call God friend; rather, He calls us a friend.

It is because God first loved us that we are His friend, not the other way around. It's also important to note that our relationship with God isn't a casual friendship. It isn't a friendship that's on equal ground.

He determines the relationship and only offers a friendship, based on His discretion as Creator. Romans 9 makes clear that we're a pot, and He is the potter. That's why it's so amazing that we are considered a friend.

As we move to the bridge, we can see this dynamic displayed again:

God of glory
Lord almighty
You have called me friend

Once again, we see the unique dynamic of the relationship. God gets the glory and is almighty. We do not and are not. However, we are still considered friend

Notice too, that the bridge enters in to directly worshipping God in light of the revelation that we are considered a friend to Him.

If you're interested in another song story, check out Open the Eyes of My Heart Chords to get a glimpse into the origin and meaning of that worship song.