His Mercy is More Chords | Shane and Shane

His Mercy is More Chords | Shane and Shane

His Mercy is More
Chord Charts

Grab the free chord charts for this Shane and Shane song from the Hymns Live album. This song was originally written by Matt Boswell and Matt Papa and also performed by Keith and Kristyn Getty. Our sins they are many, but His mercy is more!

What is the Key of His Mercy is More? 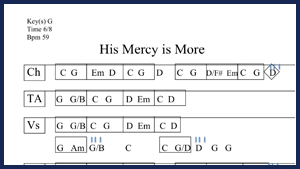 The Getty Kids version is performed in the key of E.

Generally all of the versions of this song follow the same meter and flow. The song is written in 6/8 time and has a BPM of 59. In total, the song is about 5 minutes

If you're playing this worship song on guitar, you can use the E chord family, or you can capo 2 and use the D chord family. For your strum pattern, use the 6/8 strum pattern that I teach in the intermediate worship guitar course, or simply strum a consistent down / up pattern and count to 6 for each strum pattern to complete a measure.

If two chords share a measure, marked by a box, then share the 6 strums equally between the chords. Once you get the hang of the 6/8 time signature with your right hand, you can then focus on chord switching.

What is the Meaning of His Mercy is More and Who Wrote it?

Matt Papa and Matt Boswell write a lot of songs together, and spend about five to six months writing a song on average; however, this title track came together much more quickly. His Mercy is More came from a old pastoral letter from John Neuton. This letter inspired the phrase, and the song was built around it.

This song was first published in 2016 by Getty Music Hymns and Songs.

God's mercy is mentioned 174 times in the Bible and is, of course, a strong theme throughout. However, in the context of this song, God's mercy is presented in contrast to our sins.

One of the keystone verses related to this song is Ephesians 4:2-5 “But God, who is rich in mercy, because of His great love with which He loved us, even when we were dead in trespasses, made us alive together with Christ."

Let's take a look at this worship song's lyrics and explore this modern hymn:

While most songs begin with a verse, this song begins with a chorus. It immediately starts with worshipping God, by saying "praise the Lord!." It goes on to then describe the characteristics of God's mercy on us. It has strength, it's new, and it defeats sin. This chorus acts as the cornerstone to the rest of the song.

What love could remember
No wrongs we have done
Omniscient, all knowing
He counts not their sum

Thrown into a sea without bottom or shore
Our sins they are many, His mercy is more

This first verse refers to Psalm 103: "as far as the east is from the west, so far has He removed our transgressions from us." It also refers to 1 Corinthians 13, in that, "love keeps no record of wrongs."

From here, we repeat the chorus again, so let's move on to the 2nd verse.

What patience would wait
As we constantly roam
What Father, so tender, is calling us home
He welcomes the weakest, the vilest, the poor
Our sins they are many, His mercy is more

In the second verse, we continue to see the parallel of our sin and God's mercy. Our nature is to roam, but the contrast of mercy is the nature of patience with us.

Just like we see in O Come to the Altar Chords, we see a prodigal son reference. The Father is calling the failed son back home. No matter what've done, we are bring pursued and invited back to the Father through the nature of His mercy.

From here, we sing the worship response of the chorus before moving on to the next verse:

What riches of kindness
He lavished on us
His blood was the payment,
His life was the cost

We stood 'neath a debt we could never afford
Our sins they are many, His mercy is more

This verse moves in to Gospel truth. God's mercy is an outworking of the blood and sacrifice of Jesus. His mercy isn't simply an abstract act of God. There was a payment for our sin, rooted in the work of Jesus on the cross that allowed for mercy to take place.

In fact, this third verse is probably the key verse. Without it, the rest of the song would be lacking. It paints the picture of a cost that we are unable to pay and also explains how, in fact, it was paid. Once again, this verse ends with the same declaration and resolution that even though our sins are many, His mercy is more.

From here, we sing the chorus a few more times as a realization, a declaration, and a a response to God in light of this truth.

Musically, this song is a great addition to a worship set, since it feels a little different than other modern worship songs. The chords aren't too difficult, and the song is very singable.

As you explore this song, check out all of the versions of it, including the Shane and Shane version, the Matt Papa and Matt Boswell version, and the Keith and Kristyn Getty version. Each one has a bit of a twist on the arrangement.