What Acoustic Guitar Body Shape is Best for Me?

What Acoustic Guitar Body Shape is Best for Me? 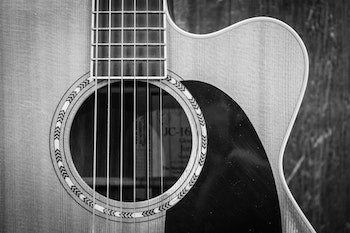 There are all sorts of guitar shapes, and each has a particular function. The first step is to identify the sound you are looking for, and then you can correctly identify the shape guitar that is best for you.

Dreadnoughts are made for rhythm strumming. These are the gold standard for most players. They provide a nice even sound between jumbos and grand auditoriums. They capture both highs and lows quite well. If you're not sure what to get, then get a dreadnought.

The smaller body styles out there such as grand auditoriums are built for finger picking. These types of guitars are built to capture warm higher tones. Since they are played at softer levels, they are made to produce a more mellow tone rather than a bright tone.

Jumbo guitars capture an incredibly rich bassy sound. They sound great for strumming but often look funny since they seem out of proportion. Also, in a band setting, the bass guitar captures most of the lows, so a rhythm player doesn't really need to focus on hitting too many low frequencies.

There's a guitar out there called the mini jumbo.  Mini jumbos are fairly rare. I used to own one, and it was an odd duck. They are rare for a reason!

You also need to consider the wood type for each style of play as you choose your guitar. Some tone woods give a more mellow sound (used for finger picking) while some are brighter (used for rhythm).

Be careful not to pick a guitar just based off of the look. There are any beautiful grand auditoriums that sound horrible when strummed! It's always best to play before you buy.