Q & A with Martin Smith of Delirious? and the Parachute Band

Q & A with Martin Smith of Delirious? and the Parachute Band 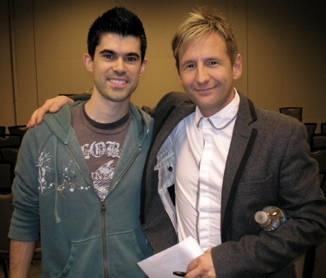 I had the opportunity to sit down with four other worship leaders in the area and a worship song writer legend, Martin Smith.  Martin is the front man of the band "Delirious?" and has written songs like "I Could Sing of Your Love Forever," "History Maker," "Shout to the North," "Lord You Have My Heart," and more. He and the members of "the Parachute Band," took time to discuss some of the aspects of song writing, the importance of the local church, and trusting God in all things. I've paraphrased a lot of what was said, but wanted to share highlights of many of his thoughts on different subjects.


Process of Song Writing
All of the songs that became great, came from being immersed in the local church. You feel the heart beat of people and what's going on and get a sense of that rhythm. Songs ironically became harder to write as we traveled and were taking our songs to the world.

Sometimes people can be protective over their songs, but I think there's a value in sharing a song and having a collaborative effort. That seems to happening more these days.

So, church pastors are in a good place to write good songs, but of course might be a bit to busy to do so. It's good to collaborate, and it's also important to not feel pressure to write songs. Some people are born to be song writers, and some are gifted in other areas such as "putting it all together" in a local church.

Writing Worship Music vs Other Types of Music
A lot of it is knowing who you are and what you do. Some people write just hymns, and some people tend to go a little bit wider. Matt Redman for instance has a specific mission of writing hymns.  Some others tend to go a bit broader in their song writing. It's important to know what you're great at. We all have our thing. We are all different parts of the body and need to understand our role. Many times the song writer isn't gifted in putting everything together as a pastor does in the church. It's important that we find our part and be true to that and excel in it.

Global Worship
20 years ago there was "something new" happening with the church and worship. Churches were introducing drums, etc, and now it's become normal. You get a sense now that something new is coming. I don't know what that is, but for those that bring that, there needs to be space. There will be something that comes again that turns it on its head. At the same time, songs still tend to stick around because they were representing what was happening during the time they were written.

Authenticity in Song Writing
Our songs have to reflect what God is doing now, but that doesn't mean that those songs won't work in the future. It's important to be authentic. It's okay to write about going through pain and being in a dark hole. We shouldn't be afraid to write them or bring them into our services.

It's most important that the song comes from a genuine place. If my 4 year old kid brings me a painting, I just love it because it's her. In a local context, if it's the real thing and the real story, people love it. Those songs are real because God touched their lives. But you can't put that on the same playing field as someone who puts a song on a record. The songs going on records are on there because they're good songs. It's just a different thing.

How to Get Your Music to Main-Stream
Trying to "meet the right person" etc is quite a secular way of looking at it. You have to ask "who do I trust." Do I trust what people in the industry tell me, or do I trust God to take the song where He wants it to go? They (people in the music industry) are well-meaning people, but there's a sort of a machine that's been created. It's the foolish things that shame the wise. Don't go chasing "it," because even if you get there, it's not every thing you thought it was going to be. You have to remember, we had very humble beginnings. 20 years ago, I couldn't string two words together, but in making our records, the presence of God was there. It's most important to trust your songs to God.

Writer's Block
Sometimes that can be our fault. Sometimes you need to go to the hospital to see what people are going through or go to a local soup kitchen. Many songs are from stories. We all face it, but I don't think we need to force anything.

The drummer for the Parachute Band
We've been trying to breakaway from the typical. Many younger people are not seeing worship as a genre or style so much, but as an expression of heart. Social justice is a big thing too, like the verse that's mentioned in Amos about God doesn't need noisy songs, but He wants justice to be done.

-Amos 5:23Take away from me the noise of your songs; to the melody of your harps I will not listen. 24But let justice roll down like waters, and righteousness like an ever-flowing stream.

It's not just about us making noise or getting up there and playing songs, but in us making an impact and being obedient. In wiring songs, we want it to come out of the heart and not so much just writing and writing in a certain time frame.


At the end of our discussion, we huddled around and prayed for each other in our specific roles of leading in worship, whether taking songs to thousands of people or shepherding and leading in the local church.